The Redesigned Currency - About the New $5 Bill

About the New $5 Bill

The new $5 bills will be safer, smarter and more secure: safer because they’re harder to fake and easier to check; smarter to stay ahead of savvy counterfeiters; and more secure to protect the integrity of U.S. currency. Because security features are difficult for counterfeiters to reproduce well, they often do not try, hoping that cash handlers and the public will not check their money.
The redesigned $5 bill retains two of the most important security features that were first introduced in the 1990s and are easy to check.

Watermark: There are now two watermarks on the redesigned $5 bill. A large number “5” watermark is located to the right of the portrait, replacing the previous watermark portrait of President Lincoln found on older design $5 bills. Its location is highlighted by a blank window incorporated into the background design. A second watermark — a column of three smaller “5”s — has been added to the new $5 bill design and is positioned to the left of the portrait. Hold your bill up to the light and look for the two new watermarks.

The new $5 bills will remain the same size and will use the same, but enhanced, portraits and historical images. Above all, the world will continue to recognize the new money as quintessentially American. Design updates will not only add complexity to the bill to make counterfeiting more difficult, but will also include other features that will help the public to tell denominations apart, particularly those persons with visual impairments.
Color: Because color can be duplicated by potential counterfeiters, it should not be used to verify the authenticity of paper money. Adding color to the bill’s design, however, does add complexity to the design. The most noticeable difference in the redesigned $5 bill is the addition of light purple in the center of the bill, which blends into gray near the edges. Small yellow “05”s are printed to the left of the portrait on the front of the bill and to the right of the Lincoln Memorial vignette on the back.

Symbols of Freedom: A new American symbol of freedom has been added to the background of the redesigned $5 bill—The Great Seal of the United States, featuring an eagle and shield, is printed in purple to the right of the portrait of President Lincoln. An arc of purple stars surrounds the portrait and The Great Seal. The symbols of freedom differ for each denomination.

Low-Vision Feature: The large, easy-to-read number “5” in the lower right corner on the back of the bill, which helps those with visual impairments distinguish the denomination, is now enlarged in the new $5 bill design and printed in high-contrast purple ink. 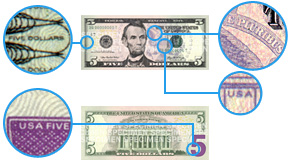 Microprinting: Because they are so small, microprinted words are hard to replicate. The redesigned $5 bill features microprinting on the front of the bill in three areas: the words “FIVE DOLLARS” can be found repeated inside the left and right borders of the bill; the words “E PLURIBUS UNUM” appear at the top of the shield within the Great Seal; and the word “USA” is repeated in between the columns of the shield. On the back of the bill the words “USA FIVE” appear along one edge of the large purple “5” low-vision feature. 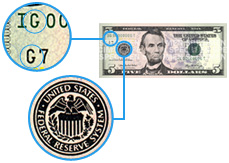 Serial Numbers: The unique combination of eleven numbers and letters appears twice on the face of the bill. On the new $5 bill, the left serial number has shifted slightly to the right, compared with previous designs.

Search This Blog and/or the web

Links for Germans in the US